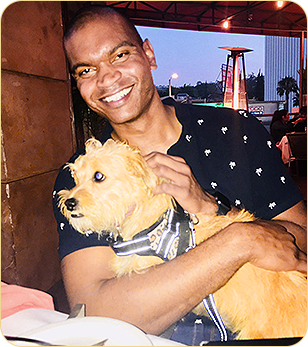 A week after Audai passed away, I (Audai’s father) woke up remembering an incident in 1991 when Audai was only six years old.  We were taking a walk as a family on a Saturday afternoon to pick up a few books when suddenly I noticed Audai was missing.  I looked back and saw him talking to a homeless man a few yards behind us.  He ran back to me and asked for some money, “Dad, the man over there is hungry, and the money can help buy his lunch.”  From his childhood to his last breath, Audai lived by that example, always wanting to make someone happy.

A few days later, I went to his bank to inform his death.  When I pulled his wallet to get his bank card, I found a little card with a prayer for generosity from St. Ignatius Loyola.  At that very moment, I knew he wanted us to continue the charitable work that he was so passionate about.  He always said, “Life is better when you are happy, but life is best when others are happy because of you.”

At only 36, Audai passed away at the prime of his life in a tragic accident.  He was a great loss to family, friends, colleagues, and everyone who had the benefit to know him.  He was passionate about life while keeping a healthy lifestyle through running and joining local sports teams.  Audai was an empathetic leader who cared for those in need and was a true humanitarian who made an impact in communities near and far.  From taking care of expenses for a medical student in Sri Lanka, building a home for a single mother to providing weekly meals to LA homeless, and supporting meals for orphan children in Sudan, Audai gave all he could in hopes of a better world.

Audai grew up in Mountain View, California.  After graduating high school, Audai attended George Washington University.  He received a Bachelor of Science in International Economics followed by a Master of Arts in Communication, Culture and Technology at Georgetown University.  He was an avid leader, high school, and college student body president.  A few weeks before his passing, he started his pollical career in the neighborhood city council because he wanted to take a significant role in eradicating homelessness in Los Angeles.  Audai loved to read, knew his way around words, and was a beautiful storyteller who would light up any room he stepped in.  At 6 feet 7, Audai was a kind giant who made people feel that anything in life was possible if you believed in yourself.